Findings from a recently published local chronic renal failure study are shedding new light on previously held conclusions about cardiovascular risk among people with kidney disease in South Africa.
The research, which was conducted as part of a doctoral thesis by an experienced nephrologist, Dr. Peter Hsu, who practices at Netcare Milpark Hospital, is the largest known study of its kind to date in South Africa. The study found that black patients with renal failure carry as much cardiovascular risk as their white counterparts, contrary to the previous thought.
“There are very few local studies on chronic renal failure, and with our particular set of population demographics there was great potential to extract meaningful information that could help to improve medical understanding and patient outcomes,” says Dr. Hsu.
“It was highly beneficial being able to work with patients who already knew me well, as this meant there was greater patient trust in the study and patients would return for follow-up sessions, which helped a great deal in collecting more conclusive data.
“In renal patients, there is a high risk of heart attack and stroke but before now it was generally believed that black renal patients were at lower risk for cardiovascular concerns than white renal patients in South Africa due to various internal and external factors,” he explains.

“The study has shown that the cardiovascular risk is equal between these two race groups and that the cardiovascular burden is very high in both. We also observed that white renal patients suffer more from atherosclerosis, which is a build-up of fats and other deposits on the artery walls that over time can restrict blood flow. Black renal patients on the other hand suffer more from arteriosclerosis, which is the stiffening and thickening of blood vessels that carry oxygen and nutrients from the heart to other parts of the body – this results in increased blood pressure.”
Dr. Hsu says that the findings of his academic research, which was conducted in private practice, have been published sooner than he anticipated, with five separate papers appearing in five international journals. He was awarded his certificate for the completion of this PhD. at the WITS PhD. graduation ceremony, which took place on Mandela Day.
“That was a very meaningful day for me – not only because I received this PhD but also because I knew Madiba very well, so it was special that the ceremony took place on that day. It felt like a continuation of the circle of life,” said Dr. Hsu.
Dr. Hsu has been in private practice for 25 years, 20 of which he has spent treating patients with chronic kidney disease at Netcare Milpark Hospital. He began this doctoral study five years ago under the supervision of Professor Patrick Dessein, chief professor of the schools of medicine and physiology at the University of the Witwatersrand.
“With the approval of the Netcare ethics committee, we were able to recruit participants from Netcare Milpark Hospital and certain other dialysis units. We had a total of 200 participants, which meant this was the largest renal patient study that we know of in South Africa. Of the 201 patients that I approached, only one declined to participate for personal reasons. The other 200 patients were only too eager to take part in something that might be of help to other sufferers of chronic kidney disease.
“We included a full spectrum of chronic renal patients with 33% in chronic renal failure but not yet undergoing dialysis, 33% on dialysis and 33% having had a kidney transplant. Specific risk factors that were identified included arterial stiffness, anaemia, diastolic dysfunction where the muscles of the heart become stiff, and parathyroid hormone that is not well known but which, if elevated, significantly impacts cardiovascular risk after a kidney transplant,” notes Dr. Hsu.
“Undertaking a PhD is a huge commitment, particularly alongside the many other responsibilities that you have when you are a doctor in private practice. It is also not easy to go back into academic study after so many years but on the other hand, as a more experienced doctor, you have a clearer vision of what you want to achieve with a study like this.
“Prof Dessein inspired me to take the plunge and helped me to see that it was possible, so my most sincere thanks go to him for his supervision and invaluable guidance that helped me to complete this study. I am also very grateful for the support and assistance I received from my colleagues. For example, there were certain practical applications from other medical disciplines, such as echocardiography, which I studied remotely through the University of Vienna specifically for this PhD but having an experienced hand to guide me through scans made the learning curve that much shorter.
“I received a great deal of encouragement from my colleagues too. Finding the motivation to keep going with such an enormous undertaking can be difficult but having a chat with a fellow doctor who in some cases has also done a PhD study in later years, can pick you up when you are feeling despondent and help you to carry on. It is wonderful to be part of a working environment like this,” says Dr. Hsu.
General Manager at Netcare Milpark Hospital, David Stanton, concluded by congratulating Dr. Hsu on his academic accomplishment. “Dr. Hsu is one of the longest supporting and most revered doctors at our hospital. This incredible achievement speaks volumes about his ongoing dedication to his specialisation and his commitment to contributing toward the best possible outcomes, not only for his patients, but for renal patients across our nation.
Netcare, in conjunction with National Renal Care, monitors the effectiveness of long-term haemodialysis in patients with a set of measures including blood tests and patient-reported outcomes on physical and mental wellbeing. More information about these measures can be found at https://bit.ly/3oymVV0 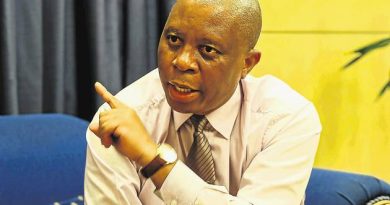 South Africa’s young people have checked out of the State of the Nation ritual.